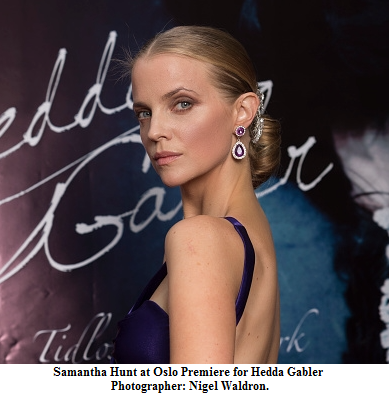 The latest movie version of Henrik Ibsen’s Hedda Gabler, just premiered in Henrik Ibsen’s home town Oslo, during the International Ibsen Festival. Amongst an exceptional cast, the actress that shines out the most is the beautiful Samantha Hunt, who is cast as the golden haired beauty – Thea Elvsted.

The character Thea Elvsted is resented and constantly used as a pawn by the other characters in this play. For all her weak and feminine ways, Mrs. Elvsted is perhaps the most (or only?) courageous character in the play.

Hedda herself cannot of course be anything but an anti-hero, which is one of the reasons that this play is a great study piece for students and academics.

We had the opportunity to interview Samantha Hunt, just after the premiere to talk about her Ibsen, Oslo and her future plans.

US MAG : What was the most surprising element to playing this character or being part of this film?

Samantha : What I didn’t expect was to develop such a strong bond and empathy with my character, which meant that remaining detached from Thea, particularly in the emotional scenes was a challenge. Acting opposite Francisco, who played Lovborg, was like acting on stage in live theatre: after filming the ‘break up’ scene, the whole crew individually came up to me and said that the atmosphere was so emotionally tangible they felt almost able to cut the air with a knife.

US MAG : Considering this was a low budget film, with such a devoted, almost purist fanbase. Were you not worried?

Samantha : The opportunity to play such an iconic role from a Henrik Ibsen play was very special and exciting opportunity. I just followed my heart and ignored any worries. As I spent more time exploring more of Thea’s remarkable qualities, I became more and more attached to her, which is why I think this is one of the most emotional films I have been part of. Thea is also a great role model for both women and men, as she epitomizes all that humankind can hope to be: equal, intelligent, courageous, determined, respectful and loving. I also get very emotional with the fact that people always seem to focus on Hedda, who is in fact the Villian, when Thea is the selfless, caring hero.

US MAG : How did you prepare for role?

Samantha Hunt : I researched in the way that most actors do before playing a part: I read as much about Ibsen’s life and Hedda Gabler as I could, studied notes about Thea Elvsted and watched numerous live theater performances of the play. However, in the end I found that Ibsen not only wrote such depth into his characters, he simultaneously left room for interpretation and thereby empowered me as an actor to uniquely interpret his work. This writing approach is mirrored in one of the underlying messages conveyed in the play: be strong, true and independent thinking.

US MAG : When you were in the Ibsen Museum, did you get some new impressions there?

Samantha : It was an exceptional experience to visit the museum. Even more special was that I, along with four other cast members, were privileged with exclusive access to Ibsen’s wonderfully preserved apartment to do a photo shoot for H&M Norway. Walking the very same space as Ibsen, seeing exactly how he lived and what inspired him has made a hugely lasting impression on me.

US MAG : Tell us about the life on set, how is working on a period drama, different to a modern day film?

Samantha : I have always enjoyed filming Victorian period dramas, maybe because I controversially enjoy wearing corsets: I’m sure I was born in the wrong era. You can see me in another Victorian role on BBC Four in Sleuths, Spies & Sorcerers – Andrew Marr’s Paperback Heroes: Ep 1 “Detectives” (to be aired on October 17th). To be honest, working on the set of either a period drama or a film posed in modern times is very similar: the difference is down to location. We were blessed with a beautiful setting for the filming of Hedda which made the whole experience far more enjoyable.

US MAG : You mention corsets, and the costumes in this film are amazing. Can you tell us abit about the costumes of the movie?

Samantha : Olya Wallington designed and made all my costumes using the most amazing fabrics. They were wonderful to wear, crafted by hand and made with love. All of Olya’s creations fitted like a glove and looked stunning. My favourite costume is a blue one, which I wear near the end, which was complimented with an outrageously glamorous hat.

US MAG : Your first time at the International Ibsen Festival, what did you think of it?

Samantha : The Ibsen Festival was an amazing event and the obvious platform from which to premiere Hedda Gabler and connect with our fan base. The festival has been a wonderful springboard for the film, which is now due to be screened in China. Unfortunately due to press and photo shoots, we didn’t get too many of the other theater performances, but had a wonderful night at the Opera House in Oslo, which I will never forget.

US MAG : What is your impression about Oslo and its’ creative arenas? How is it different compared to London?

Samantha : I am a country girl at heart, so while I like London’s diversity and all the cultural activities that a large city has to offer, I found Oslo to be greener and friendlier, with a more intimate art scene. I adore the city’s focus on combining open air spaces with art; I could certainly see myself living there! My godfather is the sculptor George Cutts whose kinetic sculpture named ‘The Dance’ is displayed in Ekebergparken, so I weirdly feel I have a family connection to the city via Thea and my godfather.

US MAG : What do you do when you are not acting?

Samantha : I’m always very busy, but work-wise I am currently working harder than ever it seems. I still model, paint, regularly keep fit, and generally squeeze as much out of the day as possible. Well-being and contentment are the most important influences in deciding how I live my life at the moment.

US MAG : Do you have any other upcoming projects?

Samantha : I have recently finished working on an American television series and am now in talks with a production company about a new feature film due to start filming early next year. Although not yet an upcoming project (watch this space), a goal of mine is to play a comedy/action part in which I can perform my own stunts, similar to Cameron Diaz.

To check out Samantha and the movie you can see the trailer at:

For further news and photos, there facebook page is: https://www.facebook.com/HeddaMovie