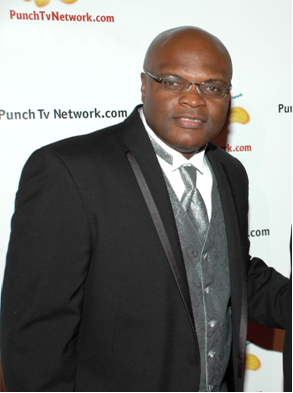 Mr. Collins is now the Founder and CEO of Punch TV Studios, which is best known for its original and creative programming that appeals to a diverse audience. He successfully launched a television studio that was the first of its kind to launch with 70% original content, and to offer transmedia advertising to its sponsors.  The television network named Punch TV was one of the fastest growing networks in the nation, and is viewed in millions of homes across the nation.
With the creation and production of hundreds of television commercials, and countless television shows to his credit, Joseph Collins has received extensive praise and recognition for being a phenomenal leader and visionary.  He is consistently proactive within the community, and prides himself on giving back by donating his time and resources.

We have recently got the opportunity to catch up with him in an interview :

US Mag : First of all Please introduce yourself to the readers?

US Mag : Who or what inspired you to get into this profession?

Joseph Collins : I have been inspired by television since I was a young child. Shows like the Three Stooges, Speed Racer and The Adams Family were among the many shows that lit the spark inside me for television. I was also inspired by people like Ted Turner, William Paley and Bob Johnson who paved the way for me to be able to do what I’m currently doing.

US Mag : What was the motive behind the launch of Punch TV Studios?

Joseph Collins : We wanted to create content for stories that ordinarily would never get told. There are so many wonderful stories out there that if told the right way can be a catalyst for change for other people who have gone through similar experiences. We are excited to have the opportunity to tell those stories.

US Mag : What is the nature of content being aired on Punch TV Studios?

Joseph Collins : Punch TV Studios develops content from all kind of stories from all over the world that inspire people. With the Punch TV Network we intend to create our own network for distribution and syndication to share all of these stories with the world.

US Mag : Jobs Act has made you qualified of your stock offering. You must be excited about this?

Joseph Collins : I am really excited to have an opportunity to be corporately funded by our community to achieve an objective for people of all ethnicities, all races and all nationalities. We are extremely grateful that America has embraced Punch TV Studios. I’m also excited that it’s going to position our company to hire the people we need to hire, that will allow our company to generate half a billion dollars by year four after the Initial Public Offering (IPO) closes.

US Mag : Are you selling your stock directly? What’s the best way to purchase Punch TV Studios stock?

Joseph Collins : Punch TV Studios is selling our stock directly to the public. You can purchase your stock on our website at www.PunchTVStudios.com. Just click on the Invest Now Button and follow the instructions. We made it a real simple process for our investors. We’re happy to be able to have the community be a part of our IPO.

US Mag : As you are getting into the next level, what’s are your future goals now?

Joseph Collins : Punch TV Studios’ future goals right now are to begin the process of developing the content that is going to allow us to tell these wonderful stories. We are confident that this is going to position us to do that.

US Mag : What’s the biggest achievement in your career so far?

Joseph Collins : I have had so many major achievements and milestones that we’ve reached along the way, but I can honestly say that my greatest achievement is being able to empower our community to be able to invest in a corporation at the IPO level. That is certainly one of my greatest achievements in business. Too often by the time the average person has the opportunity to buy stock in the company the IPO stage is already over. So I am extremely proud of this accomplishment.

US Mag : What’s the bet way to follow you for updates about you and Punch TV Studios?