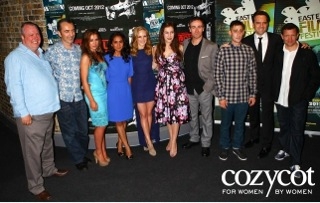 Some people have ‘it’ and some people simply don’t. Sevda Levent obviously has “IT” in spades, which means she has that magical “IT” quality that all actors pray for but not all receive. Sevda has that special untouchable quality that immediately places her in an exalted position among her peers. She works hard, no doubt, and she has studied acting extensively, but she does have that aura of maturity about her and the ease of connecting with the audience that could only have come from inside of Sevda herself.

A lot of critics see actors like Matt Damon, Leonardo DiCaprio, Jennifer Lawrence and Natalie Portman, among others, and will tell you that these actors all have the “IT” factor. We all know exactly what they mean but none of us, including the critics can pinpoint specifically what that factor really is. The same goes with Sevda Levent, she has the “IT” factor and we all know that she has it and we see it as clear as the day but we just can’t point to it and say, “There it is, right there.”

Or, maybe we could try. First of all, her name Sevda Levent means “Love Warrior” in Turkish. Yes, Sevda is of Turkish origin and Love Warrior fits her to a tee! She has the sensibilities, feelings and empathy that propel her into the top tier of actors and her warrior spirit is determined to improve constantly and to persevere and stay on top. When I look at her acting reel I see a strong woman who embodies the soul of the character she is portraying. I also see the inner strength and tight concentration that she brings to each part she plays. Sevda’s “IT” may be more discernable than we thought.

After Sevda trained at RADA and the NYT- The National Youth Theatre of Great Britain, she was offered a role in Paul Abbott’s film Twenty8K. She was so impressive with her supporting role that the directors called her back and gave her more scenes to improvise. Neil Thompson, one of the directors later said, “Sevda was an extremely talented and focused actor to work with. She made a supporting part as scripted in to a critical character in the film. I would love to work with her again preferably in a leading role.”

While she was acting in that film she was accepted to one of the top drama schools in the UK, Rose Buford College and the directors told her that she was one of “the most interesting students Rose Bruford had for a long time”.  She was also told that she had set the bar high for her whole year. Well, we’ve only covered a small part of this most interesting young woman’s wide-ranging acting career, but there’s not enough time or space so we’ll have to talk about the rest later!