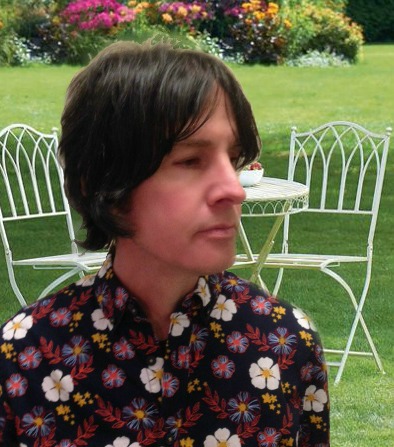 I’m talking with Patrick Coleman, the lead singer for the rock group The Parlor Snakes, who are getting to be known for their seminal glam rock/blues sound and appearance on stage. I was able to listen to some new songs from the upcoming album as well as their first album and look at some pictures. About to embark on their 2017 Stepping Off The Spaceship Tour this spring in Central America, I had the opportunity to ask a few questions.

Why begin in Mexico?

Patrick Coleman :    A couple reasons. John Has-Ellison picked up many connections there and the big cities there have a large underground group of hip people who love cutting edge art and music. They have really responded to us in a beautiful way. And we love them.

John is the lead guitarist?

Where does the name Parlor Snakes come from?

Patrick Coleman :    John got the idea from an old movie called The Ghost and Mrs. Muir. This ghost that haunts a very old mansion feels protective of a woman living there alone who has suitors coming to call. And this makes the ghost very indignant, telling Mrs. Muir they are nothing but opportunistic parlor snakes. An excellent movie and an excellent group name.

Tell me about your stage performance.

Patrick Coleman :    We listened to a lot of 70’s English glam artists, so I suppose our stage performance is like Ziggy and the Spiders From Mars, Mott The Hoople, and others. But also, importantly, The Stooges, who were not really glam, but American rock and roll.

Patrick Coleman :    Yes, quite. More than anything else, really. They represent an intense freedom and at the same time, art. Drama. A loose dramatic art.

Your style has changed from the last Parlor Snakes album. What’s going on?

Patrick Coleman :    We had the stylings of the deep American rockabilly South in our sound then. Johnny Cash, Charlie Feathers, Gun Club, Beasts of Bourbon… They were all songs I had recorded long ago as a demo under the name Buffalo Jack, and John talked me into re-recording them with a crack group of musicians, some stars on their own. Jim Duckworth from Gun Club played lead guitar and Bobby Black from Commander Cody and His Lost Planet Airmen sat in on pedal steel. It was, I suppose, a sort of experiment, though a very loud one. I was crawling out of an artistic grave. So, the album became Buffalo Jack and The Parlor Snakes.

Were you not happy with it?

Patrick Coleman :    Did we purposely change? Yes. We knew all along that we would. We are still very American, but this new change lends itself to art. And yet some things haven’t changed. I was very happy with it and I still am. I simply capture where I am in the moment, like a camera. I tell you what I see and how I feel. My mother was the painter. I am just a different kind of artist.

Are you the male version of Lady Gaga?

Patrick Coleman :    That’s a weird comparison. (Pause)… Flashy? I’m more provocative. Different type of music. I don’t need dancers, really. (Laughs) The thing is that I like the magic, doing something more than standing on stage and telling a story. In that sense I am like her, though she’s pop. We make rock and roll a spectacle again.

How are you different?

Patrick Coleman :    Rock and roll. I don’t care for that diva thing. It’s more pretentious than the old bloated rock stars. Boring too. Although, Lady Gaga said that if she could, she would perform completely nude on stage. In that case, I would go see her.

Is your audience getting it?

Patrick Coleman :    Are they? (Pause to take a puff)…  I don’t know. Stars are made in the minds of the individuals. The “halo effect.” They see a picture of me and hear the music. They don’t want to know what I had for breakfast, do they?

What is art then?

Patrick Coleman :    Art is a representation. A vehicle to take a person somewhere. And people want to go somewhere. If they like where we take them, then they will come to see us. But in the end, the artist has to make what lives within him, what he cares about, what he likes. Pop stars make what people have already liked elsewhere in order to make money. And that is all.

You wear makeup and interesting clothes on stage. Are you a cross dresser?

Patrick Coleman :    (Long pause, putting out cigarette)… Am I?

Patrick Coleman :    It sounds like you’ve decided that…No, I’m not. It’s rock and roll. That question is garbage.

Sorry. Um, what are you trying to do?

Patrick Coleman :    Have an exciting show. I don’t like boring shows. I like the energy, magic, and artistic drama in a show. It takes you somewhere else. Somewhere foreign, another world. It was the religious priests from a thousand years ago that lead the people in the dance and instructed them as to what to wear in order to transport them spiritually and mentally.

Tell me about your past groups.

Patrick Coleman :    (Laughs) There were quite a few. There are recordings of each one …somewhere. But the more notable groups were The Netherworld, John was in that one with me, and then The Ivy Lines. They were signed to Venture Beyond Records, which is a goth label we were thrown off of, and we were never goth, funny enough. We were mentioned in Mick Mercer’s Goth Bible.  And also Massive Star Records, defunct now, respectively. All of those recordings are now under the control of present label Cole-Has Records, LLC.

Patrick Coleman :    No. Art for art’s sake.  And The Ivy Lines was rock and roll. I also do time in PC and the Angels of Death. I like writing.

Can you tell me how you write songs?

Patrick Coleman :    Well… sometimes I hear parts of songs in my head during the day, like a mashup-up, and I just keep thinking of them. After a while they just seem to turn themselves into songs. Other times I dream them in disjointed parts and if I like them, I work them out. But nothing beats taking a riff or other part to the group and just jamming it out into something.

Craziest group moment in the past.

Patrick Coleman :    Years ago The Netherworld played one night at the Blue Lamp in San Francisco. A strange cabaret looking club with red velvet on the walls and ceiling and large, hanging chandeliers. We were headlining, so we saw all of these arty acts get on the stage singing, reciting poetry, acting out something, each one heckled by the crowd loudly. But I guess this sort of thing went down every night, but we didn’t know it. So we were ready for it. The girls with us wouldn’t even come inside for fear, so they stayed out looking through the window. We got on, turned up until our guitars were feeding back. And the wild and drunken crowd harassed us immediately.(Laughs) Even the girl behind the bar was letting me have it! So between songs, I gave it right back to her over the microphone. The guys in the band were really scared and we braced ourselves for them to run up on the stage at us. In the end, there was no fight. They actually loved us!

Do you believe in a God, since you studied philosophy?

Patrick Coleman :    I studied intentionality at the university and I’m interested in the breakthroughs in quantum physics, showing that all matter can be reduced down to energy waves. That’s smaller than the atom. That means that all things in the universe are simply made up of energy, which can never die. Including people. Things only break down but the energy lives on somewhere else. Light/energy waves can be thought-manipulated, as shown and proven in the famous Slit Experiment. Couple that with the theory of Intelligent Design that has gained the most ground, since it is very unlikely that chaos theory can ever exist. Everything in the universe is too organized. Not to mention perfectly mathematical. So, the short answer is yes, I do believe in God. And I don’t care what anyone thinks of that. (Laughs)

Well thank you very much for talking with me. It’s been a pleasure.

And good luck on the Parlor Snakes tour next month. Where will you begin?

Patrick Coleman :    We will kick off in Monterrey, Mexico for two nights April 14 and 15 at the massive Club Iguana. I hope to see everyone there.
Excellent! Have a great show!