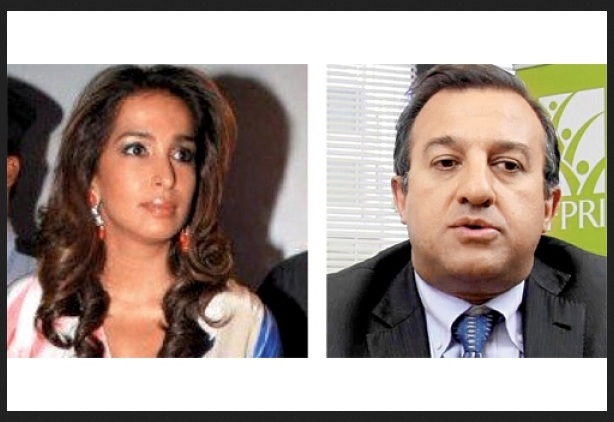 Here you can read the actual reasons of the socialite couple divorces… As you know Art patron Poonam Bhagat, and her industrialist husband Jaidev Shroff are in the throes of very serious, criminal and even fantastical allegations made by each other, as they traverse through their divorce proceedings, so this messy case between this socialite couple in Mumbai has slowly been building up. As allegations become increasingly dramatically and the high-profile criminal case reaches its crescendo, here’s what has transpired so far. See below a brief history of this case with the actual reasons behind divorce :

Jaidev Shroff is the Executive Director of 4th largest agrochemical company in the world called (UPL).  He was married to socialite and art patron Poonam Bhagat for the last decade, until October 2015, when he filed for divorce on grounds of ‘cruelty’ towards him and his two daughters with his first wife Romila. He met Bhagat in 2000, when he was in the midst of divorce proceedings with Romila because of her alleged involvement with a Dubai-based businessman. Shroff and Bhagat, both residents of Pali Hill since they were children, were married in 2005. While they were married, Shroff and Bhagat happily dominated page 3 circles in Mumbai with her picking, negotiating and finalizing multi-crore art pieces for his multi-crore company’s office in Bandra (East). Until now..

Rounds of Increasingly Serious Allegations Fired : On the 4th of April 2016, Shroff files a (Section 328 of the Indian Penal Code) FIR at the Khar police station alleging that Bhagat performed black magic on him, she poisoning him in a glass of orange juice that she offered to him with a ‘magic potion’ that she obtained from a ‘Bengali baba’. In short, the baba was arrested within two days and confession was on the table!

Shroff submits the proof of Bhagat’s cruelties on April 16, 2016, including a CD with Bhagat’s conversation with the baba at the first hearing of his FIR in Bandra’s Family Court. He posts an urgent interim plea with the court, asking them to ban Bhagat from entering their posh Pali Hill home.

On April 20, 2016, Bhagat, meanwhile, files for an anticipatory bail (ABA) against these charges, and responds with another application filled with her allegations. According to Bhagat, Shroff’s allegations of poisoning him were false.

As of April 27, the police had arrested Sufi, summoned Bhagat and her mother to file their defense, and submitted the CD with their conversation in court- without as much as collecting the glass in which Shroff was allegedly poisoning.

It gets murkier.
In her ABA application, Bhagat accused Shroff of domestic abuse (27 instances) for eleven years; she says he started beating her up within six months of their marriage. The family court issues an order banning Bhagat’s entry into her Pali Hill residence on April 22, 2016.

On the 9th of June 2016, Bhagat moves the Bombay High Court with an appeal against the order of the family court banning her entry into her Pali Hill residence.

On the 10th of June 2016 a director at UPL, Kishore Chandiramani, files a case against Bhagat (a director in the company) for cheating and criminal breach of trust in handling a four crore art installation of a tree made by Subodh Gupta. He alleges that Bhagat colluded with Gupta, and two art dealers Peter Nagy and Aprajita Jain, an official at the Delhi-based Nature Morte Art Ltd, the art firm that deals with Gupta’s work. While Nature Morte was willing to sell the installation at 3.75 lakh, the price was inflated at the behest of Bhagat to Rs 4 crore, who siphoned off the extra as commission. his complaint was filed along with a transcript of a conversation between Bhagat and Jain, finalising the art deal.

Not only Poonam Bhagat accused for cheating and criminal but also Poonam’s sister was accused of stealing art worth Rs 100 Crore from her husband, Atulya Mafatlal’s company, during a bitter divorce. Recently, she took forceful possession of her mother’s bungalow in Pali Hill with bouncers in tow. Later she alleged that Poonam had locked her in the house and had assaulted her.

On the June 21, 2016, The Bombay High Court allows Bhagat to collect her jewellery, clothes, passport and documents from her house in Pali Hill within a three-hour window.

On the bright day of June 22, 2016 Poonam Bhagat visits her house in Pali Hill, only to leave in fifteen minutes, claiming that her possessions were messed up and her jewellery missing.

___So until now, we have a divorce case between an alleged domestic abuser and adulterer, and an art fraud who her husband claims practices black magic. Her sister has also been alleged as an art fraud and forceful trespasser, while the mother (with a charge of criminal fraud in mixing solvents in petrol, already) is said to have helped with the black magic, somehow. The Bengali baba who confessed also has representation who claims he is not a baba at all, but that he works in stockbroking and transportation. A Ukrainian model features regularly, seen at parties in with chargesheeted bureaucrat Lalit Modi and Shroff’s first wife, Romilla!