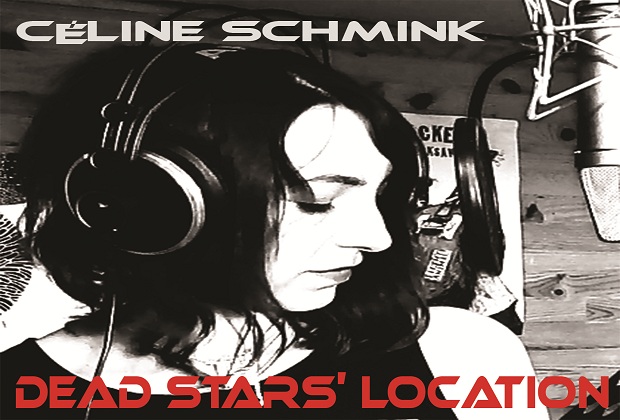 Céline Schmink is a french singer and such an original and unique songwriter. Paris-Memphis is her first studio album, Lil’wild Ones her first Live album, Solo rider her second Live LP… As you can notice, the young woman is natural and unpretentious but she’s really becoming one of the most prolific and talented parisian Indie singers ! Céline produces one single by month what’s huge ! And this is always a real pleasure and a great time to have her for an interview. Full of punchy and industrial guitar lines and dark stems, her great electro-indus single « Dead stars’location » is a massive blast, deeply wild and very introspective. We love it !  So, yes, Céline Schmink is back with a new rock and esquisite look : choppy bob haircut and pixie bangs, the kind of look that reminds us of a folk poet or a rock artist, soon-to-be icon ! Some smart american radios play some of her bluesy songs between Morrissey or Cash in their playlists ! Some music blogs and radios compare her to a french PJ Harvey, a parisian Patti Smith ! What else ? Please enjoy this interview with a peaceful and beautiful person.

US MAG: When did you know you wanted to be a singer-songwriter ?

Céline Schmink : I was 11 or 12 and listened to many singers as Billy Idol, Chris Isaak, Robert Smith, Siouxsie but also french singers as Daniel Darc. I was very alone. I was a sad child I think. But punk music was my own private Heaven ! It’s been a gradual evolution to me. But at 14 I went to Graceland, Elvis’home, and visited Memphis, then I realized it was very easy to me to compose good musics and write nice songs. I felt so inspired when in USA !  I wanted to live in Memphis. I wanted to work in Graceland later ! I feel so connected when in Tennessee ! At 25 I became a journalist and an author writing books and ebooks. But at 29 I finally begun to work as a songwriter. During my first Festival as a singer, alone on stage, singing my own songs and dancing, I understood in a flash that being a singer-songwriter was my calling, my vocation ! I don’t want to die whith a song still inside me ! So every day I do my best to create and let my songs fly and travel alone as big ones, freely. Some songs go to the radio in France, Australia, England, Belgium, USA and others inspire young singers who make their own covers. I love it ! Indie music is so far my way of life ! I’m so proud when a radio plays one of my song just after Johnny Cash or Morrissey as did WVKR ! People are so nice to me to review each one of my songs ! During the last 2 years all my music has been reviewed by the main music websites and blogs in USA, England, Germany and even Irland.

US MAG : How do you write songs?

Céline Schmink: I have many melodies in the head and always have a notebook and a Tascam in my bag. When I’m traveling I try to record all my ideas of melodies, lyrics and stems. Then I let the time work alone. I work with a producer and it’s collaborative, he helps me to make my songs more radiophonic as they say here in France. But these days, I really improve my songs and my style. I’m really on the genre of music I like, more and more. I will produce a great second studio album in a great mix of Americana genre, folk and a little bluesy touch.

US MAG : Your new single is a massive blast ! That’s a huge sound ! Where does it come from ?

Céline Schmink : The music is mine. I used to play this song with the autoharp for years !  It’s also in my live album Solo rider in a voice-guitar and autoharp  session. And I still love it today, that’s why I’ve decided to give it a new colour, a new sound ! The lyrics are mine too and are Easy Listening but also sexy ! The chorus goes like « A man entered and he looked at me. He said Hey baby, would you follow me ? » He wants to take the girl to a mysterious house over the hills, he wants to bring her to the sky… Everyone’s free to imagine the story. I’ve worked my voice in a very wild and free way. That’s a freeride song ! And the music is very loud, sounds very industrial and electro. One of my favourite albums is Ultra by Depeche Mode but I also love songs that sound very Americana genre and also the Cowboy style with pedal steel. So that’s a great mix between electro-indus music, garage and western sounds. You think it’s huge ?

Céline Schmink : Yes ; it’s a little darker than the others. I like it.

US MAG : You won many songwriting contests and submissions in the USA during the two last years ?

Céline Schmink : My songs Bêtes d’orage, Under a blue moon, Miss Molly and Compulsive ways are enroled in a monthly contests submission in the USA. That’s why I’ve won so many reviews and broadcasts. My music have been accepted and reviewed by Skope radio, Pika radio, Wesu Radio, Women in music radio, DSC Memphis radios, Jammerstream radio, WVKR radio in NY state, Indie Radio Music (Butler, WI), Appetizer Radio Show in Texas, Rock’n’roll Psychic Radio (Hamilton, Ohio), Radio Yes! Patras, Greece, Radio Trier in Germany. Many music blogs wrote some reviews as Radio Trier blog, Strutter Magazine, Jammerzine, Music Arts Monthly and many more … I’ve won more than 20 contests in 2 years. I’ve been very happy to be compare to singers as Patti Smith or PJ Harvey, even if I don’t have their great vocal !  Here in France radios they compare me to Bardot who has got a more humble voice but so glamorous too.

US MAG : Thank you Céline, we recommend our readers to listen to your greatest latest song Dead Stars’Location. We’re sure it’s going to be a hit on Itunes and others.