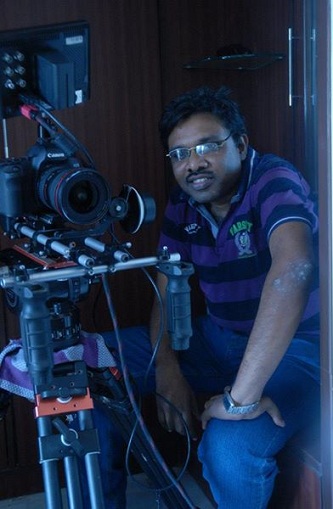 US MAG today had a little lively chat with Sreedhar TN, an Indian Indie filmmaker who discussed his latest film with us among other things.

Check Out The Interview Of  Sreedhar TN :

Q : Please introduce yourself to the readers and how and when did you first get into film making ?

I was employed with Amazon India when I first got into film making. I met this lady called Nysa Rehman who was interested in producing a film and I had an idea with me. A few facebook chats and we met in Hyderabad, all I had was a one line premise, which we both developed together and thats how Janaaza, my first film was born.

Q : What are your future goals as a independent filmmaker ?

I wish to start my own production house sometime in the near future and hope to introduce new talent to the movie world. I am currently in the process of tying up with various distributors all over the world so that in future, I as an independent film maker can secure a release without having to pull too many strings. My main goal is to present a never before seen India to the western world, and come up with as many Indian made films in english for the western audience as possible.

Q : How is the response to your first movie ?

We unfortunately could not secure a proper theatrical release in my home country India, but did manage to get ourselves showcased in major film festivals and a limited theatrical release in countries where urdu is spoken. The response to the limited release was encouraging and the producer did make a decent profit from the movie

Q : Is there any particular reason to become an independent filmmaker ?

Well mainly the budget. It is really difficult to convince a producer to invest in your movie when you offer the same kind of budget which a star filmmaker is offering. So to convince an investor to back me up, I choose to pick up subjects which have limited locations thereby reducing the cost of production and most of the actors are newbies and are willing to be on board with a negotiable fee. I was aware of the fact that I would not be able to make a commercial movie or studio backed movie right in the beginning of my career, so I chose to be an Independent filmmaker and yes it does have its advantages too. I can pick up the any subject and go ahead without worrying about any kind of interference or depend on the box office collections, mainly because my movies are made on shoe-string budgets and even a 5 day run can guarantee the investor a complete return on their investment.

Q : Can you please let us in details about your upcoming movie “Tailgater”?

The movie is a thriller made with an indian cast and crew for an English speaking audience. It is about a girl who is invited to a family gathering and she drops in along with a friend and right from the word go, nothing is what it seems and soon she finds herself a target of kidnap, murder and every horrible thing imaginable.
The movie is being made in English and we also have an alternate hindi/urdu version titled “khush-amdeed” mainly for the Indian audience. Both the versions are slightly different keeping in mind the target audience to which each of these films is being showcased to.
Principle Photography would commence in Mid October and we hope to present it to an audience by Mid 2017

Q : At what point did you decide to become a filmmaker ?

I guess it was when I was around 15, I happened to watch Pulp fiction and was so fascinated by the film, I started to hunt for articles about the film and on Quentin Tarantino. I somehow managed to get hold of enough material about the film including how it was shot. I was spellbound and I guess I turned into a closet filmmaker then.

Q : Are you working on any new projects?

Presently Tailgater is what is keeping me preoccupied. I do have a plan of making another thriller in English right after I finish this.  But it is too early to talk about any future projects right now, may be if you guys still find me printable material after Tailgater and come back, I might have some news then.

Q : What are your future plans for film making ? Your vision for the coming years.

Like I said, I wish to start my own production house to make more of independent films and try to create an audience base for myself

Q : How’s your feelings when you made your first movie ? You must have enjoyed the experience?

I was kind of numb, so there were no feelings as such when i made my first film. But it was the aftermath which was like “ wow! I made a film” and it started giving me a high when people who saw the film told me how much they loved it.

Q : What’s your goal in life you want to achieve next?
Well It might seem farfetched now, but I want to create a parallel movie industry something which would have the world classify it like: movies, tv, online cinema and sreedhar tn films

Q : Are you active on social media? what’s the best way to follow you?