Rob Sky first appeared on the NYC music scene with his debut single, Beautiful, in 2007. His debut album, Right Now, was released in 2010 and followed with a tour in the UK. Rob has performed on stage with MJK, Blu Cantrell, and Monique. In 2017, he released TEN, an anniversary album that included previous unreleased tracks from the recording sessions of his debut album. After an 8 year hiatus, he returned to the studio and began recording again, releasing a few singles before finally completing his latest album, What’s Left of Me. Rob is already back in the studio, working on the follow up. Want to know more about him then read his interesting interview here:

US Mag: Where are you from and what style of music do you create?

Born and raised in NYC. I’d say my music is a mix of pop/rock/r&b.

US Mag: What sparked your interest in creating music? What keeps you going?

I was a musical theatre kid in middle school through college. So that’s where my love of singing comes from. My way of dealing with emotional experiences (good and bad) is just to write them down and get it out so its not bottled up inside anymore.

US Mag: Outside of a short hiatus, you pump out new material on a regular basis. Where do you find inspiration? What fuels your creativity?

I’m fueled by the day to day life experiences. Some songs on the album are about a night out with friends (Outta My Way) and some are about going on a first date and hitting it off, but they just want to be friends (Wait for You). I know thats crazy specific HAHA but like this album is incredibly personal.

US Mag: How is the new album, What’s Left Of Me, different from your previous releases? How come there are so many break up songs?

I know everyone says this, but this really IS my most personal album to date. Every single song is about a specific moment in my life. I can listen and tell you what specific lines are referencing. It’s pretty wild. I find love songs boring. Breakups are so much more interesting to write about. So that’s where my writing generally goes.

US Mag: Name one or two challenges you face as an indie musician in this oversaturated, digital music age?

The biggest challenge is definitely cutting through the noise. Like you said, the industry is SO oversaturated that its like trying to scream in a stadium full of people. You really have to make GOOD music that people connect with to stand out.

US Mag: What was the last album you listened to?

MP3’s all the way. I’m from New York so space is limited HAHA.

US Mag: How about this one…. Do you prefer Spotify? Apple Music? Bandcamp? Or something else? Why?

This one is tricky. So to listen to my personal music collection, I use Apple Music 100%. But as an artist, the Spotify platform gives me much more insight into my music/streams/listeners. Apple Music has a lot of catching up to do to Spotify’s artist platform.

US Mag: Where is the best place to connect with you online and discover more music?

If you go to https://linktr.ee/therobsky it lets you pick where to listen to new music! Or you could follow me on Instagram @therobsky

Stay tuned. I’m already back in the studio working on the next one. 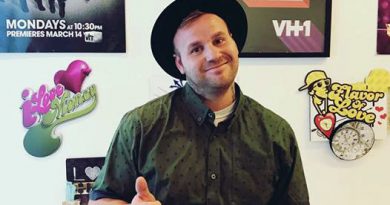 After Meeting with VH-1 Earl Says, “I would be on reality TV if the situation was right”